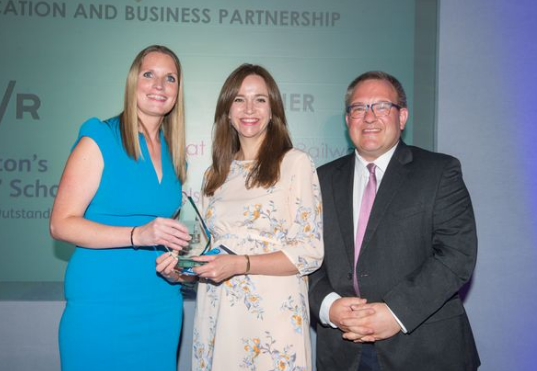 CGS students from Envision team Ph7 were the proud recipients of the Education and Business Partnership Award at the Bristol Education Awards on 26th June, which went to Great Western Railway and Colston’s Girls’ School.

This collaboration has facilitated large-scale student-led projects, such as the girls’ posters challenging gender stereotypes being put up in train stations, creating an audience of millions.

CGS Sixth Form is immensely proud of the incredible achievements of the two Sixth Form Envision teams; the innovative school-business partnership with GWR was especially recognised at the prestigious award ceremony.

Both of our Envision teams- pH7 and Aspire- got through to the Boardroom Final on Wednesday 13th June. They had to pitch their ideas to a panel of judges, including the Deputy Mayor of Bristol. All students have worked incredibly hard to make an impact on the issue they have decided to work on. Team Aspire have challenged the lack of careers advice in schools and Team pH7 have tackled gender inequality. Every individual in both teams has done so with professionalism and passion. CGS is very proud of their success, as they should be. Fingers crossed one of our teams is crowned the winner!

We wish both Sixth Form teams the best of luck in the Envision finals where both teams have been invited to the last round of judging on Friday 6th July. The overall winning team will be announced by and presented with their award by Bristol’s Mayor, Marvin Rees.